Close up on Busch

The Félicien Rops museum in Namur (Belgium) held this summer an interesting exhibition on Wilhelm Busch in collaboration with the Wilhelm Busch Museum of Hannover. Busch (1832-1908) is widely known as one of the crucial comics artists of the nineteenth century, but as the exhibition showed he painted also extensively (about 1,000 paintings). The artist is of course more known for his humoristic stories such as Max und Moritz. The exhibition showed some original drawings, which Busch executed on a very small format. Nevertheless this small format, every scene is rendered in striking sketchy, loose lines but they do the trick: the pencil drawings are far more curvy and dynamic than the woodcut versions of the broadsheets. The printed version respects largely the original composition, but alters the drawing by using unbroken contour lines, by leaving some elements out (such as the thick hatching on the left) and adding various elements (eg the hatching on the belly of the man). The flat coloring helps in defining various parts or elements that Busch left undefined in his original pencil strokes (for instance the border between the shirt and the trousers of the man). 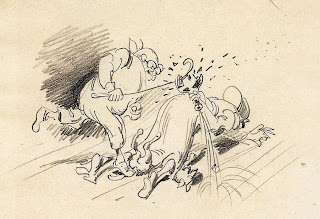 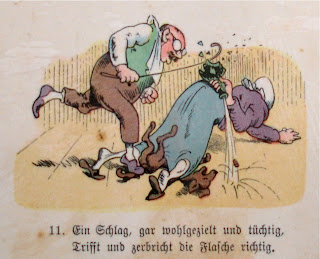 In the exhibition and the catalogue (only available in French Wilhelm Busch, de la caricature à la DB) the fact is stressed that Wilhelm Busch was influenced by the new photographic medium and that he - unlike most of his colleagues - did not solely use long shots, but that he included also close ups in his picture stories. Examples can be found in Die Fliege (1861), Der Schnuller (1863), Max und Moritz (1865). Every time he uses the close up for a clear narrative purpose, namely to make some small but important elements bigger: for instance the crushing of an irritating fly under a foot.
So, Busch used close ups long before cinema (Grandma's Reading Glass of 1900 is often acclaimed to have used for the first time a close up in a short film narrative). Nevertheless it would still take a long time before the insertion of such close ups became a regular practice in various comics.