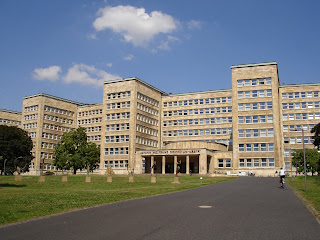 I.G.-Farben-Haus by Poelzig (1930)
today Goethe University in Frankfurt am Main (photo Pascal Lefèvre)
I've just returned from the largest academic conference I ever attended to, the 19th biennial congress of IRSCL (International Research Society for Children's Literature) hosted by the German Intitut für Jugendbuchforschung at the Goethe-Universität Frankfurt am Main. Some 400 delegates came from all around the globe to the modern Westende campus, with the famous building by Hans Poelzig, I.G.-Farben-Haus which was once the home of the production administration of Zyklon B. After the war it served for the American army, but in 2001 the Goethe university renamed the building the Poelzig-Bau. The architect Poelzig (1869-1936) fled in 1936 for the Nazi's to Turkey, where he died. He was not only an architect but also a painter and set designer for the movies (Der Golem, wie er in die Welt kam, 1920)
Anyhow his building is impressive and the campus is quite pleasing. The organisation of the conference was perfect - except for the fact that our half day off was planned on a Monday when almost all the musea were closed. With some plenary lectures (unfortunately Zohar Shavit was too ill to travel, so she sent a videotape) and 15 concurrent sessions during 5 days we had an enormous choice. Furthermore English was not the only conference language, but there were lectures and complete panels in French, German or Spanish, which is in itself a good thing if there's at least a translation available - otherwise one only preaches to the already converted.
Except for keynotes, I attended 19 papers (in four different languages) of the concurrent sessions, so I can't judge the global conference. I chose foremost the comics-related papers, but also talks on early representations of Africa. As always, the level was quite variable: I heard some very interesting presentations, such as Giulia Pezzuolo's talk about extraterrestrials in Italian fantastic literature for children, early 20th century. For her most books aimed to convey the dominant values rather than entertain or develop one's critical mind. Sandra's Beckett's visual exploration of the very different contemporary versions of Little Red Riding Hood was quite entertaining. This famous fairy tale figure can be transposed to virtually any cultural setting: from an African in a leopard-skin to a Japanese in a kimono.
Comics specialists should for certain become more active in these circles of children's literature. Browsing through the program it seems that most academics focus rather on content, translation problems or on cultural, ideological aspects, but for instance very few attention is given to the economical side of children's literature. Most scholars were indeed from education or literary departments. It must be also one of the few fields were women outnumber their males colleagues.
I was in a panel on children's media and (post-)colonialism with excellent colleagues from the Netherlands: Lies Wesseling (on the 'adoption plot' in missionary discourse and children's literature), Sybille Lammes (on post-colonial computer games), Helma van Lierop (on the construction of Africa in Dutch children's literature around 1900) and Astrid Surmatz (on representations of Lappland in two Swedish children's book).
Frankfurt turned out a rather pleasant location with interesting musea such as their Film Museum and the Communication's Museum (which are almost neighbors). This winter the archaeological museum will feature an exhibition on the tapestry of Bayeux in collaboration with the French Centre Guillaume le Conquérant, the National Museum in Kopenhagen and the Viking Ship Museum of Roskilde. 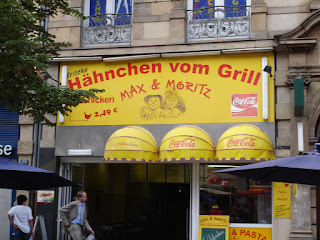 the mischievous Max and Moritz still live on
in the streets of Frankfurt am Main (photo Pascal Lefèvre)
Posted by Pascal Lefèvre at 3:01 PM