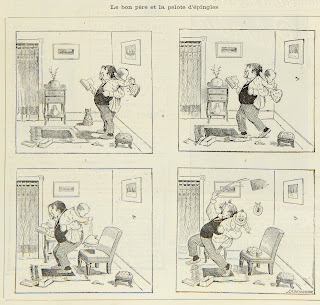 Next week I’ll present in Frankfurt at the 19th Biennial Congress of IRSCL (The International Research Society for Children's Literature) a paper on the early mischief gag comic, based on a case study of this genre in the Belgian weekly Illustration Européenne (1885-1904). It is common knowledge that at the turn of the 20th century the comic strip boomed in the Sunday Pages of the American newspapers, but the magazines were crucial as well. Comics published in Puck and Judge were often translated and reprinted in European illustrated magazines. During the so called Belle Époque Belgian illustrated magazines as Illustration Européenne and Le Patriote Illustré published scores of American comics. One of the popular genres of that time seems to be the mischief gag comic, about children playing pranks on someone else, usually an adult. A mischief gag implies that a child or group of children acts intentionally (for its own pleasure) to cause material, corporal, mental or social distress on their victims. Since the child is physically inferior to an adult, the child will only prepare his prank in the absence of the adult or when the adult is unaware, because he is working, or talking to someone or sleeping. The pranks in comics range from quite innocent deeds as stealing apples to really painful tricks, such as electroshocking the maid.
Famous examples are of course the German Max und Moritz (Wilhelm Busch, 1865) and the American The Katzenjammer Kids (Dirks, 1897), but there are many others late 19th century. Two artists working for American magazines Franklin Morris Howarth (circa 1870-1908) and Frank Ladendorf were quite active in this particular genre of the mischief gag.
The basic formula of the mischief gag is not only typical for the comics medium, but was also very popular in the first years of cinema – especially in American cinema (Tom Gunning 1995). The early cinematographers took their inspiration for short comedy films not only from vaudeville but also from the graphic humor of the illustrated journals and papers. Ladendorfs series Mischievous Willie (The New York World 1898-1903) was already in 1902 turned into a short live action movie (Mischievous Willie’s Rocking Chair Motor) in the Biograph Studios in New York. Also the French film pioneers, the Lumière brothers adapted in 1895 a well known gag from the comics for their L’Arroseur arrosé. For film scholar Tom Gunning (1995:88-89) Lumière’s L’Arroseur arrosé can be described not only as the first fictional (that is, staged) narrative film but also as the first film comedy.
In contrast to Max and Moritz who were executed after a few assaults, most mischievous children in the later (German and American) comics are clearly not punished. Comics historian David Kunzle (1990:249) suggests that “in the late 19th century (…) rebellion was no longer so fearful a concept for the lower middle classes, and so they might safely, vicariously enjoy the power asserted with impunity by the child rebels.” But in the moralistic French popular prints of the late 19th century the disobedient child still gets his punishment or his pranks backfires and the rascal has then to suffer the consequences of his action.
An interesting element is how the reader is implicated in the visual narrative. In practically all cases the reader sees clearly how a child is preparing a mischievous trick. While the future victim is still unaware of his near misfortune, the reader can often anticipate what will happen next. He and the mischievous child are the only ones who have that knowledge; but contrary to the child the reader has to remain a passive witness, he or she can’t prevent the malicious action from taking place. Moreover the reader is generally expected to laugh with the misfortune of the victims and share the sadistic pleasure of the mischievous child. As the French philosopher Henri Bergson remarked laughter requires an absence of feeling, a "momentary anesthesia of the heart". In the case of a gag comic this is not so difficult to do, because the drawings remind the reader of the artificial and fictional status of the scene. 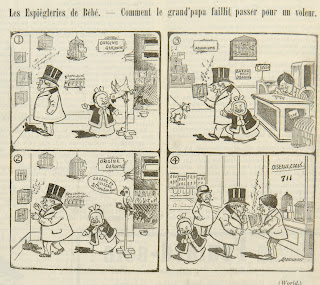 Frank Ladendorf
Les Espiègleries de Bébé. - Comment le grand'papa faillit passer pour un voleur
in Illustration Européenne, vol. 30, n° 24, 1900-06-17
In some specific examples, the formal aspects of the mise en scène are stressing this crucial implication of the reader. In a few comics by Frank Ladendorf (see illustrations) the mischievous children turn towards the reader and look ‘directly’ in the eyes of the reader. This is even more relevant, since none of the other characters of the scene turn towards the reader, they remain completely in the fictive and diegetic space; unlike the young prankster the adult victims seem not to be aware of the extradiegetic space (Lefevre 2008). The gag comic becomes at such moment quite self-conscious. Unlike drama comedy can allow more easily such moments of self-awareness, the illusion of reality is for a comedy of lesser importance than for a dramatic context. I would argue that the direct look of the mischievous child in the Ladendorf’s comics isn’t an incidental feature, but a striking and important device – which seems less used in the mischief gag films of the same period.

Posted by Pascal Lefèvre at 6:30 AM