A majority of the comics that were published in Belgium before the birth of Tintin in 1929 came from abroad: often the names of the characters are changed and no references to the artists name or the original publication can be found. Therefore I call out to other specialists if they might recognize some of the following characters I found in the Flemish children magazine De Kindervriend early 20th century (unfortunately not dated).

The two characters called in the Dutch text 'Job & Bob' I've already recognized, it are the English Weary Willie and Tired Tim by Tom Brown, but does somebody know where and when this gag was first published ? 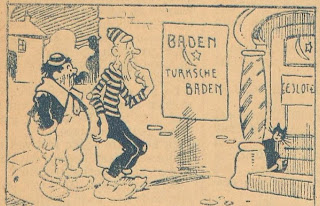 Tom Brown's Weary Willie and Tired Tim called Job & Bob
in the Flemish children's magazine De Kindervriend (N° 220)
The next panel features some mischievous children, quite resembling to the Katzenjammer Kids. Steve Holland mailed me and suggested that it are: "The Bunsey Boys which appeared in The Wonder in 1901 and continued in The Jester and Wonder when Wonder changed title (but continued its numbering) in 1902. Apparently, the strip was drawn by Leonard Shields when it appeared in the latter, although it is likely he was not the original artist." 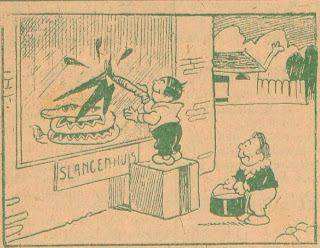 from De Kindervriend (N° 221)
Here's another yet unidentified comic character, probably from the British press. 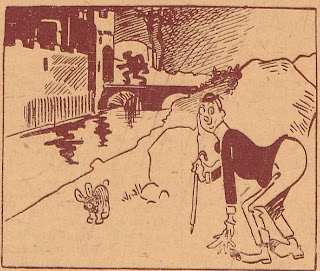 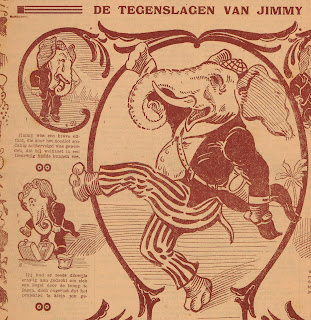 An elephant called 'Jimmy' in De Kindervriend (N° 214)
So any help with the identification of these comics would be greatly appreciated.

Posted by Pascal Lefèvre at 7:42 AM